The automobile giants have collaborated with the iconic workwear brand Carhartt to create a conglomeration of tough and hardworking ideals in the 2017 Chevy Silverado 2500 HD Carhartt Concept. This truck is designed to tackle the toughest tasks while integrating the rugged aesthetics of diligent lifestyles, reflected in its versatility and resiliency. The reputable Carhartt is known to design heavy-duty work clothing for durability, functionality, and warmth, which are all incorporated into the upcoming 2017 Chevy Silverado. The Chevrolet does not like to disappoint its fans, which is why its engineers do everything in their capacity to ensure every automobile they introduce into the market is perfect, even if they have to team up with other companies to achieve this goal. 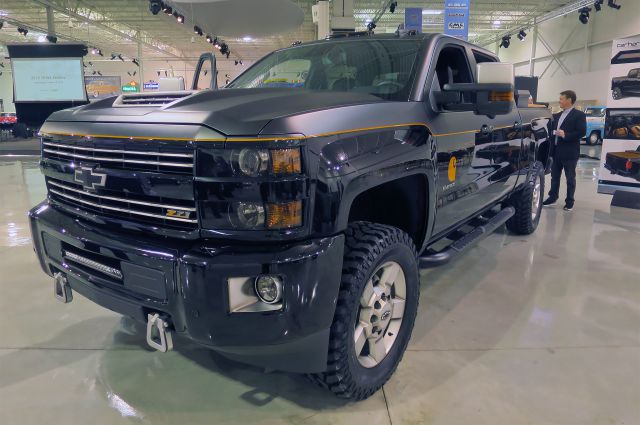 The 2017 Chevy Silverado 2500 HD Carhartt exterior look will be a conventional 2017 Chevy Silverado 2500 HD Crew Cab Z71 combined with an addition of several bespoke and dealer available parts. The result is a truck with a one-off look. The vehicle is painted in a 2-tone black color scheme, with its lower glossy black finish coating. Its upper half is coated with a Carbon Flash matt finish. However, the two portions are separated with a pinstripe shade keyed to Carhartt’s trademark Duck Brown color. Up front, the grille is given unique Antique Nickel accents matching the mirror caps, fog-light surrounding, and 20-inch, 5-spoke wheels.

Its front bumper receives bespoke triangular tow hooks and a single row of LED-light for off road use. The tow hooks are finished in Antique Nickel coating. So, the truck boasts side steps that help make entry and exit from the truck easier for users. Around the rear side, the cargo box has a toolbox plus a swing-out tool chest. It rides on 20-inch wheels that are unique to this concept. These wheels come wrapped in mud-terrain tires that offer superior traction when off beaten trail.

The collaboration between a giant automaker and a reputable clothing maker has resulted in a perfectly bespoke interior that features familiar materials offered by Carhartt. The two companies also worked together to integrate Carhartt’s material into the armrests, seat bolsters, and door panels. They are stitched together with the Carhartt’s triple-stitching technique. The Carhartt logo is laser-etched into headrests. Despite the changes, the interior still includes all the contemporary tech from Chevy that includes the large driver information screen, MyLink infotainment system, and Chevy’s newest exterior camera system. 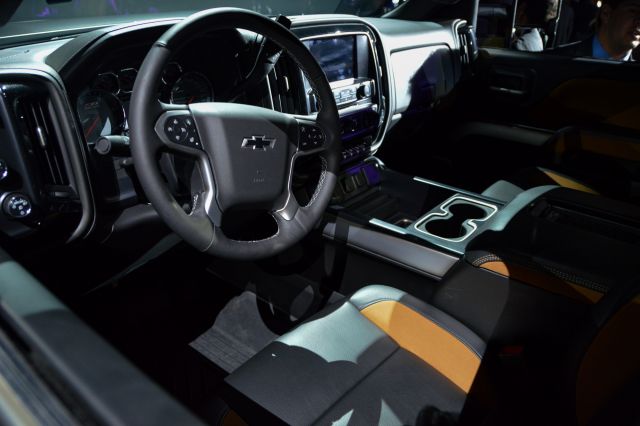 Under the hood of the 2017 Chevy Silverado 2500 HD Carhartt is a 6.6-liter V-8 turbo-diesel engine. Furthermore, this engine will produce an SAE-certified 445 horsepower and 910 pound-feet of torque. The engine boasts a cast-iron block with induction-hardened cylinder walls, with deep skirt design. Its 4-bolt main bearings are cross drilled for added strength. Another change is the crankshaft, which is now constructed of forged micro alloy steel, and feature larger diameter. The engine performs more quietly and smoother. 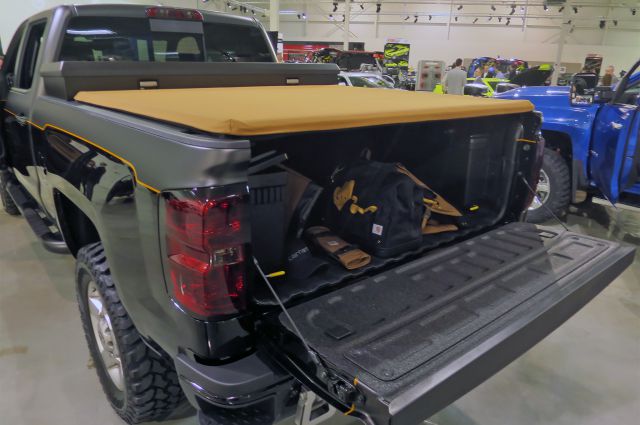 The 2017 Chevy Silverado 2500 HD Carhartt is also expected to make its debut on November 1-3, 2016 at the SEMA show in Las Vegas along with 20 other vehicles. However, it is just a concept and is not available for sale.