Take cover! The beast is here. This new 4×4 that will be launched by Nissan aptly named the ‘Titan Warrior’ is truly a beast in the open cab vehicle market. However, this tough monster will definitely steal the heart of the bad boys and girls, gangsters or simply men who are all about swag. If there ever existed a magic mirror, then the answer to the question, “Mirror, mirror on the wall; who’s the sturdiest of them all?” will surely be 2017 Nissan Titan Warrior.

The Nissan is not new in manufacturing pickups for its customers. The company has many other pickups in the market but out of all those, the Titan Warrior is one of its kinds. Its powerful body and the durable engine provide a comfortable, all-terrain driving experience. According to the Nissan Motor Company, the 2017 Nissan Titan Warrior will be officially unveiled at the New York International Auto Show this year. Here is a detailed review of this upcoming version of Nissan Titan Warrior. 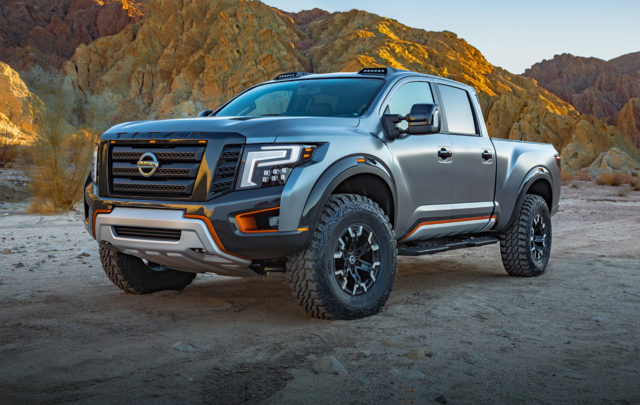 Just a glance is enough to make you a crazy fan of this beast. We, ourselves, are perplexed about where to start our review of the exterior from. Well, let’s discuss the headlights first. The headlights of this ultra-modern pickup are unique and hypnotizing that makes this pickup look as if it has arrived from the future. Apart from the headlights this pickup also has a roof mounted led lights that will give the driver increased visibility when driving off the road far from cities.

The pickup will have 37 inches tires that are mounted on 18 x 9.5-inch custom wheels. The panels of 2017 Nissan Titan Warrior are designed to give them an even more muscular look which provides a beautiful brawny look to the overall appearance of the pickup. The gross weight of 2017 Nissan Titan Warrior will be around 7000 pounds and its length will be 228.1 inches which are 14 inches less than Titan XD.

This upcoming version of Nissan Titan Warrior will be made available in three different configurations/models namely:

The exterior color in which the pickup will be made available for purchase hasn’t yet been disclosed however one color of 2017 Nissan Titan Warrior that the company official has revealed is Thunder Gray with black and magma orange highlights.

Just like the exterior, the interior of this car too has been designed around the same color scheme i.e. carbon gray, with magma orange piping and stitching. The seats of the pickup are carbon colored and above the dashboard, there is an orange colored data gauge which gives the interior cabin of this pickup a sporty touch. The center console and doors also have bright orange highlights on it. The beauty of the interior cabin of 2017 Nissan Titan Warrior is further enhanced by placing polished aluminum on the vents and steering wheel. 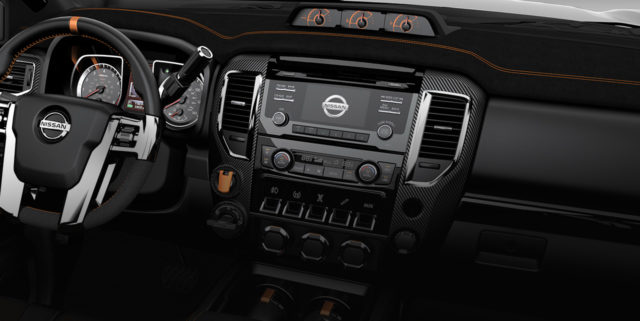 This pickup by Nissan will have a Cummins® 5.0-liter diesel V8 engine that will produce a torque of 555 lb-ft and energy of 310 hp. This engine will be mated with a 6-speed automatic transmission system that will enable this pickup to achieve a speed of 60 mph in a matter of just 8.5 seconds. The maximum speed that this pickup can achieve is estimated to be around 130 mph. One more engine option will be available to the customers. It will be a 5.8-liter Endurance® V8 Gasoline engine mated with 7-speed automatic transmission system and will be able to produce energy of 390 hp. Now that’s a humongous amount of energy!

This upcoming pickup by Nissan, unfortunately, won’t have great fuel efficiency. It is expected that its energy ingestion will be 13 mpg in the city and on highways it will be mere 18 mpg. The maximum capacity of the fuel tank will be 28 gallons. 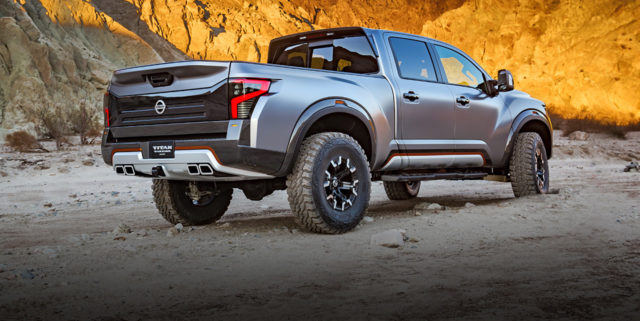 The Nissan is a brand that has always provided superior quality cars within a reasonable price to its customers but this 2017 Nissan Titan Warrior is not a cheap pickup. Its basic trim is expected to carry a price tag of around $31,000, while more sophisticated and platinum trims are expected to be priced at around $60,000. Pickup sector, as you may already know, is a sector with aggressive competition and this new version of Nissan Titan Warrior is expected to face rivalry from the following pickup brands.

According to company officials, 2017 Nissan Titan Warrior will be released at the 2016 New York International Auto Show. It’s also been heard that this pickup by Nissan is most likely to bite off a huge chunk out of the pickup sector in North America. Any other information released by the company officials or rumors related to 2017 Nissan Titan Warrior will be posted on our website, so keep visiting for more updates!