The Amarok is a midsize pickup truck built by Volkswagen since 2010 that is available in either single cabin or double cabin with a four wheel drive or a rear wheel drive configuration along with diesel or gasoline variants. Combining affordability, safety, innovation, and technology, the German brand has stood the test of time over and over again and always came out on the top. In the Inuit language, the meaning of Amarok is ‘wolf’. The Amarok is produced in Argentina, Algeria, USA, Germany and is a top competitor among similar pickups such as the Nissan Navara, Toyota Hilux, Chevrolet Colorado, and the Mitsubishi Triton. The all new 2017 Volkswagen Amarok which is designed by VW not only looks stylish but it offers a variety of different options and amenities. Let’s take a look at the new Amarok. 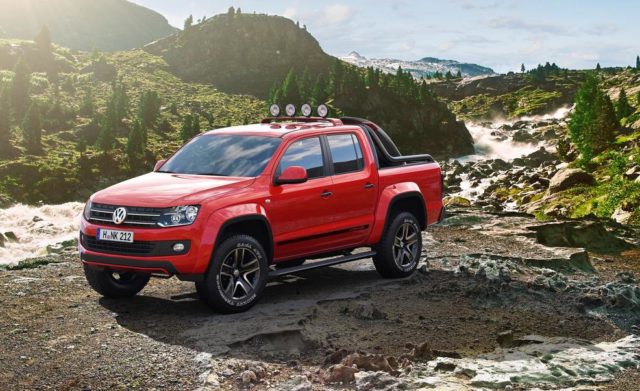 The 2017 Volkswagen Amarok is consists of a redesigned exterior which is sleek, sporty, and classic. The front of the exterior has been facelifted along with the front grille made of chrome. The front bumpers look sportier, whereas the bumpers have been further lowered. The width of the fenders has also been increased. Surrounding the front grille, the Amarok features u-shaped daytime running LEDs with bi-xenon headlamps; however, there hasn’t been many changes to the taillights.

The 20-inch alloy wheels deck the 2017 Volkswagen Amarok with the side sills composed of LEDs. Additionally, the Amarok has tinted lights and air intakes. The pickup features an antilock braking system (ABS) with 16-inch rear brake discs and 14-inch front brake discs. The Amarok also contains wide opening doors for easy accessibility to the cabin.

The interior of the 2017 Volkswagen Amarok is composed of ergonomically designed front seats which are comfortable as well as pleasing to the eyes. They are 14-way electrically adjustable with additional options for the headrest, seat depth, lumbar support, angle of the seat cushion, and the backrest. The seat positions are high enough for good visibility.

The interior of new 2017 Volkswagen Amarok is high quality with a completely enhanced instrument cluster panel that no longer has round contours but horizontal and vertical straight lines that give a more striking look. The new model also contains more storage compartments than the previous models. It boasts of a new steering wheel with a multifunction ability so that the driver can operate the telephone, radio, or the multifunction display. In addition, certain trim levels like the Aventura will have paddle shifters as well. Upon closer look, it can be observed that the Amarok has a frameless rear-view mirror with a built-in rear backup camera.

The infotainment system is located above the center console in such a way that it lies directly in the driver’s field of view. The new infotainment system consists of multiple functions such as the ability to integrate your Smartphone apps on the display of the touchscreen.

A parking assistance system is also available which will make parking a hassle free experience for any driver. The Amarok also features four power sockets rated up to 12 Volts, an air-conditioning system, and Bluetooth connectivity. 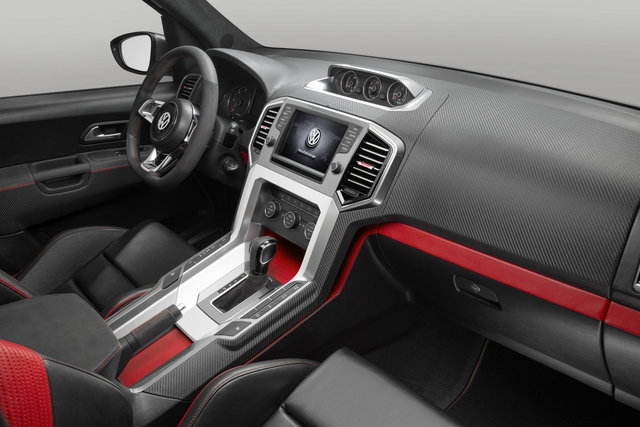 2017 Volkswagen Amarok – What’s Under the Hood?

The 2017 Volkswagen Amarok features a brand new turbo direct injection (TDI) 3.0-liter V6 diesel engine, producing 165 kilowatts of power and 550 Newton meter of torque for the higher end trim. Lower end V6 versions will feature a four-cylinder engine with power ratings of 120 KW and 150 kW as well. The lower trim of the Amarok will offer a 2.0-liter diesel TDI engine with the option of selecting either a 103 kW motor output power or 132 kW. The engines will be Euro-6 compliant and will be available in either a six-speed manual transmission or an eight-speed automatic transmission. The engines will be quieter and there will be lower emissions as well. Additionally, the new steering system consists of an electronic power system known as ‘servotronic’.

Furthermore, buyers will have the option of choosing either the rear-wheel drive version with a six-speed manual transmission or the all-wheel drive (4Motion) variant with an eight-speed automatic transmission. The 2017 Volkswagen Amarok will be able to accelerate from 0 to 60 mph in about 7.9 seconds and achieve a top speed of 120 mph. 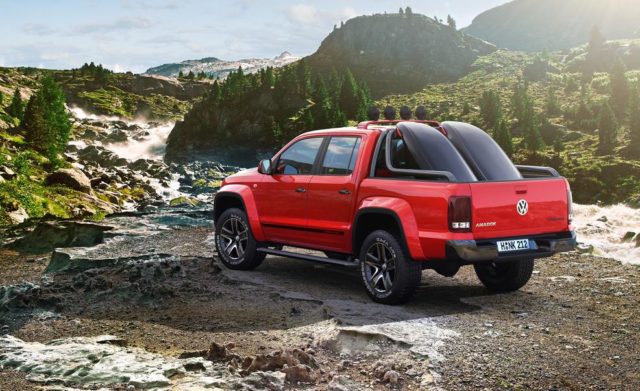 The 2017 Volkswagen Amarok is expected to hit the European market in September 2016, starting from around 25,720 Euros. It is reportedly also said to include safety features like Volkswagen’s unique pedestrian monitoring system and the city emergency braking system.