The 2018 Nissan Titan Warrior will literally steal the show by bringing along uncompromising off-road components, technological convenience, and aggressive styling. The current generation Titan pickup reflects Nissan’s enthusiasm towards the modern and progressive design approach which many (controversially) have found it to be a blatant copy of America’s best-selling pick Ford F-series.

But as Nissan loves challenges, the Japs are now gearing up for taking the segment by storm with a bold move – 2018 Nissan Titan Warrior. The 2016 Titan pickup has done half of the impression thing by using Cummins® diesel engine to present extra-duty pickup class. 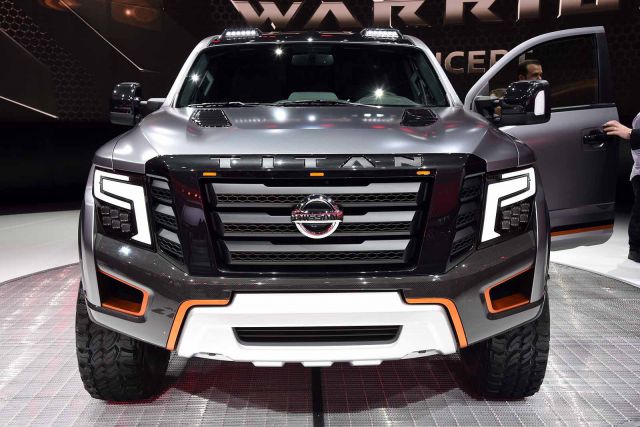 It all starts with an idea, a concept to make history and create legends. In the snapshot, the 2018 Nissan Titan Warrior will be somewhat of a break that the makers certainly need as standard/average pickups have become passé. Everything else will seem a dissolution with the charisma that the 2018 Titan Warrior will effuse. In other words, the already-awesome Titan XD will have its limits pushed to the extreme. Similar to Ford F-150 Raptor, the Nissan Titan Warrior will appeal as a public display of style enhancements. From a first glance, the new model sets an exclusive adventure-ready notion with a seemingly mean demeanor. This exclusive model is 6-inch wider and is taller by almost 3-inch than the standard Titan as it possesses a beefed-up body and rides on massive 9.5-inch custom alloy wheels that wear 37-inch off-road tires.

This special edition model is mostly concern with outer appearance and one can see for themselves. The Nissan designers seem to have started right from scratch while giving life to this model as its design elements are a far cry from the standard Titan. The designers have started with matte-gray paint which runs as a perfect background.

Inside, the cabin is sporty and posh. The seats wear a portmanteau of cloth combined with leather upholstery in black. The dashboard is wrapped with suede and Magma Orange stitching strikes an eccentric contrast. There are auxiliary gauges in a set of three which also holds an orange reading. The center console of 2018 Nissan Titan Warrior also holds toggle switches and heated/ cooled cup holders. Furthermore, the steering wheel is significantly different as well. This steering wheel’s leather upholstery is accentuated by contrast orange stitching; gloss black accents also add a premium stylistic flavor. 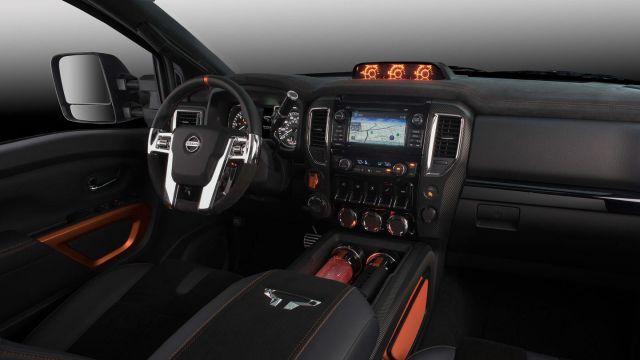 The powertrain of the 2018 Nissan Titan Warrior is largely a carryover from the standard model. The 5.0L turbodiesel V8 along with a 6-speed automatic transmission remains unchanged. As to what experts have predicted, engine outputs will see subtle alterations and stay close to 310 HP. Furthermore, the integration of Variable Valve Event and Lift (VVEL), fuel economy will be kept in check at 22 mpg in the city, 25 mpg on highways, and 24 mpg on a combined scale.

Keeping the powertrain aside, the 2018 Nissan Titan Warrior makes use of an all-new suspension system. The front suspension in specifically includes internal-bypass reservoir coil-over shocks and a lower control arm. This setup even consists of robust ball joints that cater to an extended range of movement. Similarly, the rear units incorporate racing-style shocks and custom reservoir mounts. The other exclusive additions also include a custom sway bar and a lengthened prototype axle. 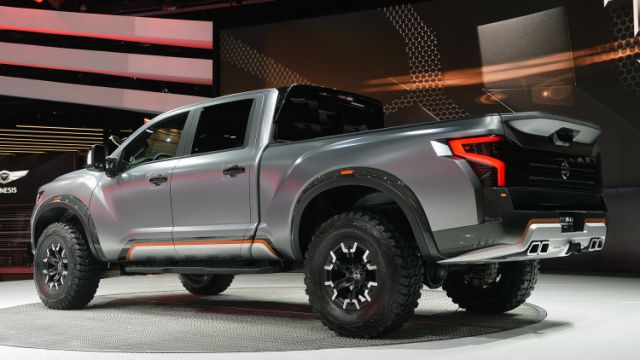