It was even the vehicle of choice for several armies, most notably the British army. Unfortunately, the Land Rover ended production for the Defender in January 2016, after over 60 years, with strict European emission rules being cited as the cause. Land Rover, however, announced that a new model was being developed to replace the iconic Defender, christened as the 2019 Land Rover Defender Truck.

Fans of the previous Defender’s angular defined shape will be disappointed to find out that the old shape won’t be returning. According to Land rover’s chief design officer Gerry McGovern, the retro Defender’s shape is not going to make a comeback.

The company intends to give the 2019 Land Rover Defender Truck model a “fresh and modern design that is instantly recognizable”. The old boxy shape will be smoothed out to a more rounded outline. The previous angular front and rear will now have a curved profile. However, it will share similarities with the new Land Rover Discovery model.

The vehicle’s exterior will also be crafted from Aluminum, to help reduce weight, and consequently, reduce fuel consumption.

The interior of the Land Rover Defender Truck will also go through a complete overhaul with several modern refinements. The older Defenders were equipped with the most basic controls and interior features, with the aim of maintaining the vehicle’s rugged appeal.

The newer model, however, is expected to come with luxury additions that are standard features in other Land Rover brands. The new Defender will be five seaters with full leather upholstery as a standard feature.

The 2019 Land Rover Defender Truck will also have a revamped high-end audio system. It also includes advanced climate control feature. The restyled passenger compartment will also come with at least three 10 inch LCD displays with one at the front for controlling the audio system, air conditioning and for displaying the GPS navigation data. 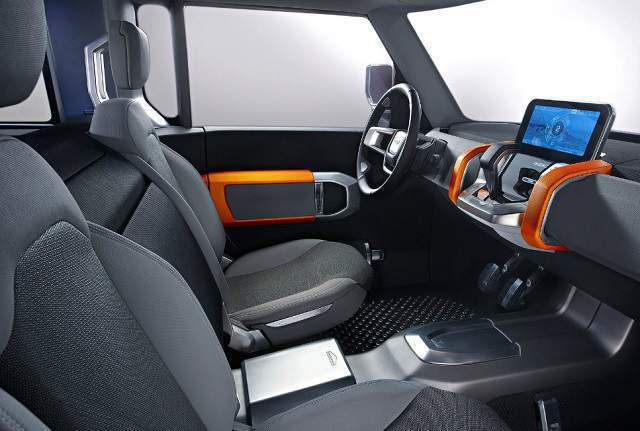 While a lot has been modified on the exterior of the 2019 Land Rover Defender truck, the engine will retain most attributes from its predecessor. From some rumors, it will get a 3.0-liter turbocharged V6 engine. This engine will make around 340-380 horsepower with 332 lb-ft of torque. It will be hooked to 8-speed automatic transmission.

The performance of the 2019 Land Rover Defender Truck has been fine-tuned to not only be suitable for off-road driving but also cruising along city roads where its predecessor often found difficulties. Thanks to its all-aluminum body, this vehicle is much lighter and now has better handling and fuel consumption.

The new Land Rover Defender Truck is expected to be launched in late 2018. It will however not be available in showrooms until 2019. However, we expected the price to start from about $30.000 for the basic model.